Is yogurt vegan? In its traditional form the answer is very simple: no. However, there is an ever-increasing number of vegan yogurts on the market catering to the tastes of yogurt-lovers on plant-based diets. In this article, we explain all about why traditional yogurt is not suitable for vegans and take a deep dive into the ever-expanding world of vegan yogurts.

Yogurt is a relatively rare example of a word that has come into the English language from Turkish (yoğurt). It describes milk that has been through a process of bacterial fermentation. First, the milk is heated, then cooled, and then the bacterial culture is mixed in. The process of fermentation that subsequently takes place produces lactic acid and gives yogurt its typical texture and tart taste.

The fermentation of yogurt has been linked to numerous health benefits. One of the early records of yogurt being consumed in Europe concerns its medicinal use. In the 16th century, King Francis of France was apparently suffering from a serious case of diarrhea, which was cured by the Sultan of the Ottoman Turks, Suleiman the Magnificent, sending him some yogurt. When introduced to the United States in the first decade of the 20th century, yogurt was sold as a health product, being made available both orally and in enemas.

The milk used to make yogurt typically comes from cows, but the milk of other animals is sometimes used, including milk from goats, ewes, yaks, camels, mares, and water buffalo.

Obviously, non of these traditional yogurts are suitable for vegans because they come from animals. And, as I’m sure you are aware, the Vegan Society’s definition of a vegan is someone who follows “a philosophy and way of living which seeks to exclude—as far as is possible and practicable—all forms of exploitation of, and cruelty to, animals for food, clothing or any other purpose.”

However, as the vegan movement continues to grow, more plant-based yogurts are being created to meet the demands of that market. Although, incidentally, in Europe, EU law forbids any product that does not come from animal milk to be labeled as a yogurt. Different wording is used on the labeling there for the products that in the US and elsewhere are called vegan or dairy-free yogurts.

That minor issue aside, let’s now turn our attention to the world of dairy-free yogurt (yes, we’re still calling them yogurt on this blog, sorry EU…).

Is there vegan yogurt?

Fortunately, in the modern world, there are a huge array of non-dairy, plant-based yogurts out there catering for vegans. Let’s look at some of the different ingredients that they are made from:

Soy milk: The original non-dairy alternative, soy milk is made from soybeans and has been being produced commercially since at least the 1930s. Soy yogurts have a particularly savory flavor and don’t always require the addition of a thickening agent during the process.

Almond milk: An increasingly popular choice nowadays, almond milk yogurt brings the health benefits of almonds (which are naturally high in calcium) combined with a nutty flavor. However, almond milk tends to be quite watery, so thickening agents are normally added when it is used to make yogurt.

Oat milk: Vegan yogurts made with this ingredient have a tart flavor, similar to traditional, unsweetened yogurt. Oat milk produces a semi-set yogurt, which works well in recipes.

Cashew milk: Has a silky texture, but cashew milk doesn’t typically set as well as other vegan yogurt options, so it is normally combined with extra thickening agents.

As with traditional yogurts, dairy-free options are packed with bacterial cultures that produce numerous health benefits. The good bacteria in yogurts contribute significantly to your gut health, which has a massive impact on your whole body’s health. Amongst many other benefits, a healthy gut increases nutrient absorption and ensures that your immune system is functioning well. Incidentally, the bacteria in plant-based yogurts tend to be different from those in traditional dairy yogurts, because they don’t include those bacteria that thrive on the lactose in milk.

A quick note on sugar: as you will see from the list of vegan yogurts below, many of them contain added sugar. As regular readers of this blog will know, sugar is not always considered vegan because of the way it is processed. The issue is that some cane sugar is filtered through “bone char” (in other words the charred bones of animals, normally pigs or cows).

It’s very difficult to find out which cane sugars have been through this process, and which haven’t. So, if you are concerned about this issue, the easiest way to guarantee that what you are purchasing hasn’t been through bone char processing is to look for either beet sugar or organic cane sugar. You can also contact the manufacturers of your favorite dairy-free yogurts just to confirm that they don’t use sugar that has been through bone char processing.

What are some of the vegan options on the market?

Although it’s easy to find recipes online that will give you step-by-step guides to creating your own vegan yogurt, there are also lots of options out there on the market already. Here, we look at some of the top dairy-free yogurts that are widely available. 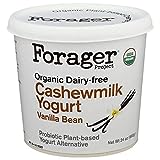 The good folks at Forager Project produce a range of cashew yogurts that come in flavors including plain, vanilla, lemon, cherry, strawberry, and blueberry. The plain, unsweetened one is the best option for the health-conscious because it contains twelve times less sugar than some of their other flavors. Forager Project yogurts also incorporate live bacterial cultures, natural thickeners, and coconut milk. They also have higher protein options that integrate a mix of brown rice and seeds.

A vegan company from Sweden, Oatly produces a range of vegan milk and yogurts made from, you guessed it, oats. They make the yogurts from fermenting oats but, unlike Forager Project, they don’t include live cultures. They do have the health benefit of not including added sugars though, and they supplement their yogurts with vitamins including B2, D2, and B12 (the latter being one vitamin that is particularly difficult to get on a vegan diet without supplementation). 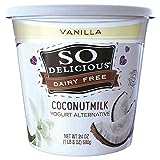 As noted above, coconut works particularly well as a dairy-free yogurt option. So, you’ll be delighted to hear that So Delicious make their vegan yogurts from coconut milk and coconut cream. They also incorporate live active cultures and some supplementary nutrients, including vitamin B12. Although, like almost all of the commercially produced yogurts, they do also add thickening agents. As with Forager Project make sure to avoid the flavored versions if you don’t want to get a huge, extra sugar hit.

Producers of a wide range of dairy-free alternatives, Silk use almond milk, live active cultures, plus thickeners and flavorings to make their vegan yogurt options. As with most of the brands detailed here, you have to make sure to get the unsweetened variety if you want to avoid large quantities of sugar in your yogurt somewhat undermining the health benefits.

New on the market in 2021, Icelandic Provisions is the first company that we are aware of offering a vegan version of the Icelandic-style skyr yogurt. Skyr yogurt is processed differently from regular yogurts to produce a creamier texture and a less tart and sour flavor. Icelandic Provisions’ vegan skyr is made from oat milk and is available in six flavors: plain, vanilla bean, mixed berries, raspberry, mango passionfruit, and cold brew coffee.

Please be aware that it is not available right now but they announced that it will return to shelves in 2022.

Nancy’s is a regular dairy company that also offers a selection of vegan yogurt options. For example, they offer probiotic vegan oat milk yogurt (made with live active cultures and fava beans for extra protein). They also have an organic soymilk version, which comes in both plain and sweetened versions.

So, what does it all mean? Traditional yogurt is a dairy product made from different types of milk. Therefore, it is never suitable for vegans. But vegan yogurt lovers should not despair. As there is a huge range of vegan options on the market, made from different alternative milks and matching the consistency and bacterial health benefits of regular yogurts.