Is Gatorade Vegan? Can Vegans Reboot with This Widely Loved Sports Drink?

Peanut Butter is as essential as water to the Earth if you are addicted to nothing else. Things that serve a variety of uses are always dependable and close to the heart. Such is peanut butter and such is America’s most popular brand, Jif Peanut Butter.

You have probably been using Jif Peanut Butter in homemade sauces, cookies, and even smoothies. Because peanuts are plant-based, no thought ever arises about the nature of the ingredients that may have been used in an otherwise innocent product.

It is important for vegans to thoroughly check the ingredients no matter what they are about to consume. Because this is where manufacturers play, many non-vegan ingredients are often a part of otherwise plant-based foods.

Are all varieties of Jif Peanut Butter vegan?

As expected, the answer is no. Some varieties of Jif Peanut Butter are vegan while some are not.

As there are no animal-based ingredients in these varieties, they are vegan. Sugar. monoglycerides, and palm oil are problematic for strict vegans. 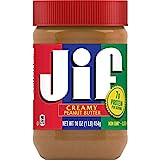 This variety contains peanuts, sugar, palm oil, molasses, honey and salt. Honey is a direct non-vegan ingredient. Strict vegans are against the consumption of both sugar and palm oil.

How is honey non-vegan?

Honey is a product of animal exploitation. Honey bees don’t produce honey for human beings. They work hard to create their own storable energy source that humans steal from their hives. It takes several days for bees to gather nectar and turn it into honey that fills their hives. This honey is meant to sustain their larvae and feed their colony.

Many bees are often killed by humans while collecting honey. Moreover, bees have to redo all the hard work of creating honey again. Often, the cycle goes on and bees keep getting exploited.

Stealing honey from bees is similar to stealing milk from cows. Just like the dairy industry is avoided by vegans, honey should also be avoided. Constant inbreeding of honey bees has also resulted in more number of genetic abnormalities due to narrowing of the gene pool. Introduction of forgein breeds  of honey bees has also increased the prevalence of new diseases amongst native bees.

The fast dwindling population of bees is a direct result of their exploitation by the honey industry. Bees are essential to the balance of our ecosystem.

Honey is not only problematic for vegans, it is ethically and environmentally destructive.

Sugar and mono and diglycerides are the only additional problematic ingredients present. Simply Jif Peanut Butter is vegan.

Although the name of this variety says ‘reduced fat’, it is indeed processed with a lot of chemicals that make it far from vegan. Otherwise, there are no animal-based ingredients in this variety.

The only problematic ingredients in this variety are sugar and mono and diglycerides. Otherwise, Reduced Fat Jif Peanut Butter is vegan. 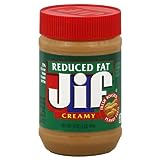 If you aren’t aware, anchovies and sardine are fish. So basically, the Omega-3 variety of Jif Peanut Butter has fish based ingredients. Animal-based products are unacceptable in a vegan diet.

Tilapia gelatin is another animal based substance that vegans cannot consume. Tilapia is also a type of fish. Tilapia gelatin is prepared by boiling the skin, bone, and cartilages of this fish in water to attain a homogeneous transparent substance responsible for providing a chewy texture to food items.

The presence of such products of animal cruelty make this variety unacceptable.

Both these varieties of Jif Peanut Butter are completely vegan-friendly. The main ingredients of this variety include peanut Butter made from roasted peanuts, sugar, vegetable oils, mono and diglycerides, chocolate spread, natural and artificial flavors. The chocolate spread is made of cocoa processed with alkali, corn starch, and polyglycerol esters of fatty acids.

As there are no animal-based ingredients in both these varieties, both of them are vegan. The natural and artificial flavors and sugar are controversial.

This variety is also vegan. The basic ingredients of this variety include roasted peanuts, sugar, molasses, natural flavors, mono and diglycerides, and vegetable oils.

Both the Cinnamon flavored and the Maple flavored varieties are vegan. Sugar and natural flavors are the only controversial ingredients present.

Are the controversial ingredients really problematic?

The answer depends upon the will of each individual. Some of the potential non-vegan ingredients are more problematic than others. Continuing their consumption is entirely a matter of individual choice.

The mono and diglycerides are often obtained from animal fats

Most companies do not specify where they obtain their mono and diglycerides from. While it is completely possible to obtain this product from plant-based sources, many manufacturers obtain it from animal based products.

However, Jif Peanut Butter has clarified that they obtain their mono and diglycerides from soy.

Sugar may or may not be vegan

All varieties of Jif Peanut Butter contain sugar. The manufacturers are not aware whether all sugar in their products is filtered using bone char or not. Manufacturers obtain their sugar from different sugar factories which may or may not utilize bone char to whiten and bleach their sugar.

Bone char is usually made by burning the bones of dead animals to high temperatures in combustion chambers. Not all sugar is filtered using char. A large amount of sugar in America is bleached using granular activated charcoal.

So it may not be right to entirely quit upon sugar in food. It is not even practical. Considering the fact that most sugar is not even whitened using bone char, you may not want to avoid the sugar that is vegan in every way.

Even bone char is made out of the bones of dead animals. Animals are not killed for their bones to serve this purpose. It is entirely up to you to decide what you want to eat.

All products obtained from plants are not vegan. This is especially true for palm oil. Palm oil is produced in capitalist palm plantations that are responsible for the widespread deforestation of tropical rainforests.

Rare and nonrenewable plant life has been permanently lost for the sake of huge profits these palm plantations render. Widespread deforestation has also caused habitat loss for a large number of animals who are progressing higher on the charts of endangerment day by day.

Rampant deforestation along with release of greenhouse gases from these plantations have caused a spike in global warming. It is extremely clear that palm plantations are wreaking devastation for the Earth’s environment.

As we raise voices against the unfair treatment of factory workers in clothing textiles of Bangladesh, let’s not forget the unethical treatment of workers in palm plantations. They deserve as much attention and support.

So is Jif Peanut Butter Vegan?

Some varieties of Jif Peanut Butter are vegan while some are not.

The vegan varieties include:

The non-vegan varieties include:

Like most sugar, the sugar in Jif Peanut Butter could be or could not be filtered by bone char. This is entirely up to you to decide.

Palm oil is present in two varieties of Jif Peanut Butter that you may want to avoid.

Relish the vegan varieties of Jif Peanut Butter and delve into your good addictions guilt-free.