Is Beer Vegan? Find Out Which Beer Brand Is Vegan!

We’re all familiar with M&M’s. These candy-coated chocolate buttons are a staple treat during our childhood – and perhaps even well into adulthood. There’s just something about the sweet exterior and the surprising burst of chocolate from inside it that keeps us wanting more.

But as delicious as they are, there is much controversy as to whether these favorite candies are vegan or not. While it may seem like a harmless candy, it may still contain animal products that go against our vegan principles.

So in this article, we finally give you the answer to the popular question: are M&M’s vegan? Continue reading to find out.

Before we dive into the details, let’s first discuss the history behind these sweet treats.

Believe it or not, the first market for these chocolate buttons was the United States Army. These candies were created in 1941 by Forrest Mars, Sr., the son of Frank C. Marks, the founder of the Mars Company.

Forrest Mars, Sr. had the idea because of the chocolate shortage during the war. He wanted to provide a chocolatey treat despite the limited chocolate available. Fortunately, he saw some soldiers eating the British-made smarties – which were chocolate buttons with a hard candy-colored shell.

Mars developed his own hard panning method to harden the sugar syrup, which was then used as the hard candy exterior. His method was unique, since the outer candy didn’t melt, and that made it less messy to consume.

Mars then partnered with the son of Hershey’s Chocolate president, Bruce Murrie for the production of these candies using the former’s hard candy shell and Hershey’s chocolate for the interior. Thus, M&M’s was founded – representing Mars & Murrie.

Almost 80 years have passed since it was introduced, and M&M’s remain a top favorite among many. Since 1941, it has also introduced new flavors like the Peanut Chocolate Candies and the Dark Chocolate Candies. They also make limited edition M&M’s with different colors and styles to represent special occasions. That way, you’ll always remember these sweet chocolate buttons every season.

Now that you’re familiar with the history of M&M’s, let’s proceed to the heart of this article and answer the question – are M&Ms vegan?

We hate to be the bearer of bad news, but M&M’s Milk Chocolate candies are not vegan. Upon an inspection of their ingredients, the brand has clearly included a warning printed on each pack: that these chocolate buttons contain milk.

As you know, milk is an animal-derived product. While it does not contain meat, it is still derived from an animal, and that goes against the principles of veganism.

However, if you are a vegetarian, then you don’t have to swear off eating M&M’s. But if you’re vegan, then this may not be the best news for you.

While the classic M&M’s Milk Chocolate and Peanut Chocolate candies are clearly non-vegan, there is much controversy as to whether Dark Chocolate M&M’s are vegan or not.

You see, dark chocolate, by itself is vegan. It comes from pure cocoa beans, and usually does not contain other additives like milk or sugar. That is why it often has a slightly bitter taste. That is the reason why a lot of people believe that the M&M’s Dark Chocolate candies are vegan.

However, if we look into the label, we will see the same disclosure printed on the package: that the product contains milk. As such, we can conclude that Dark Chocolate M&M’s are not vegan.

However, even if M&M’s are not considered vegan, there are numerous alternatives that you can enjoy. Here are some of the vegan-friendly chocolate buttons in the market for you to try. 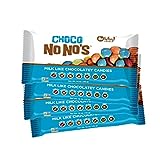 Out of all the M&Ms alternatives we’ve tried, we are most impressed by this Chocolate No No’s from No Whey! Foods.

These chocolate buttons similarly come in a hard candy shell with an assortment of colors. Surprisingly, the chocolate interior has a creamy taste to it, which makes it even more convincing as an M&M’s alternative.

But despite these similarities, the No Whey! Choco No No’s are a sure stand out because it is completely dairy-free. That’s why we believe vegans will surely love them.

Aside from being vegan, these Choco No No’s also do not contain the top allergens like peanut, tree nut, gluten, soy, and sesame. It’s also kosher and has no artificial flavors and colors. That’s sure to guarantee guilt-free snacking, whether you’re vegan or not.

And only recently, the brand proudly boasts that these chocolate candy bits are non-GMO certified. That means that it does not contain any genetically modified ingredients. That gives you peace of mind, knowing that you’re consuming food that’s made the proper way.

The No Whey! Foods chocolate bits come in two flavors – the classic Choco No No’s and the refreshing Peppermint No No’s.

Without a doubt, these chocolate pellets are the best vegan alternatives to M&Ms. 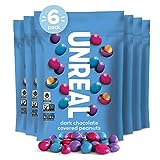 Another popular M&M’s alternative are these delicious chocolate gems from Unreal.

Unlike the M&M’s dark chocolate, Unreal’s version contains real dark chocolate – sans the milk. That’s why this line of chocolate gems is perfectly suitable for vegans.

With that said, this vegan alternative offers two flavors. The first is the Unreal Dark Chocolate Peanut Gems, which can easily take the place of Peanut M&M’s, and the second is the Dark Chocolate Crispy Quinoa Gems which can replace the Crispy M&M’s.

Since it uses real dark chocolate, these candies have lower sugar content than their counterparts. It also boasts using all-natural and non-GMO ingredients, so you know it’s perfectly safe for human consumption.

Aside from being vegan-friendly, this can also be a treat for people with soy allergies. Both the Peanut and Crispy Quinoa variants do not contain soy or soy byproducts – and that’s great news if you’re intolerant of that ingredient.

With its mouthwatering flavor and interesting textures, there’s no doubt that each bite will leave you wanting more. That’s why we believe it’s aptly named – because everything feels so unreal. 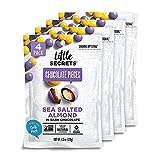 If the No Whey! Foods and Unreal alternatives seem to have limited flavors for you to choose from, then the Little Secrets Chocolate Pieces will be perfect for you.

One of the biggest selling points of these chocolate pieces is that it contains less sugar than most other candy brands. That makes it the perfect choice for people who have to be more conscious of their sugar intake. But even if you don’t have to be conscious of your blood sugar, these tasty treats make the perfect guilt-free candy snack.

To add to being low-sugar, the Little Secrets Chocolate Pieces contain non-GMO ingredients. That gives you peace of mind, knowing that what you’re consuming is free from any form of unethical genetic engineering.

But most importantly, these chocolate pieces are also dairy-free, making them a suitable alternative for vegans.