Everyone loves Pringles; however, adopting a vegan or plant-based diet is game-changing. Are you wondering if Pringles are one of the things you have to give up if you’re switching to a vegan lifestyle? You’re lucky you found your way to this article because we have the answers to all the questions going through your mind.

Some Pringles are vegan-friendly, and others are not. It’s also worth mentioning that the recipes change from time to time, so it’s best to check the ingredients yourself to stay on the safe side.

Here’s a small list of some popular Pringles flavours you can still eat if you decided to go vegan: 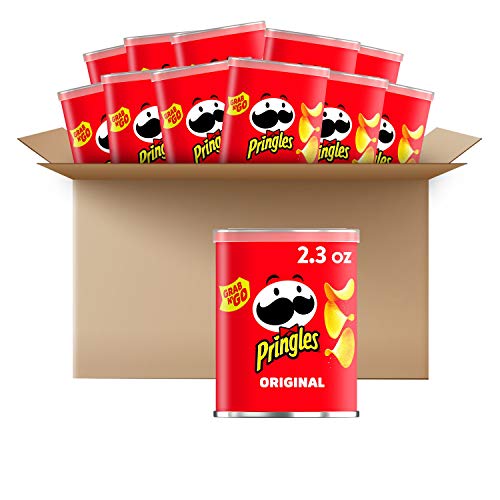 Which Pringles Are Vegan and Which Are Not?

In this part of the article, we won’t just list the different pringle flavours and tell you whether they’re vegan or not. Instead, we’ll take a closer look at the ingredients to help you pick the vegan Pringles, even if they’re not mentioned here.

Deciding which ingredients are vegan was a bit tricky. For instance, the bacon taste has nothing to do with actual bacon. In fact, it’s mainly a mixture of natural flavourings, including spices, onion, coffee, garlic, and others.

Furthermore, as emulsifiers are usually derived from animals, the ones used in making Pringles are plant-based. That said, the following list includes all the ingredients you should be happy to see if you’re switching to a vegan diet:

Non-vegan Pringles flavours are even more surprising than vegan ones. For example, the “Salt & Vinegar” flavour contains lactose, which, as you may already know, is a type of sugar that’s found in milk.

Moreover, most vegans expect the BBQ flavours to be vegan. Unfortunately, they’re not; these flavours contain whey, which is a milk protein. Jalapeno Pringles contain whey protein too, so they’re not vegan.

Here’s a list of the ingredients you should stay away from:

For those who want a quick peek at vegan Pringles rather than getting into the details, check out this list:

We wish the non-vegan list were a shorter one, but sadly, the majority of Pringles aren’t suitable for vegans. Here’s the list:

In this section, we’ll talk about the most popular Pringles flavours, tell you why they’re vegan or non-vegan, and mention some worthy alternatives for the non-vegan ones.

The majority aren’t because, as mentioned earlier, they contain milk protein, aka whey. Nonetheless, the popular Pringles Texas BBQ Chips are, in fact, vegan, and if you check the ingredients list, you conclude the same.

This flavour contains lactose, so it’s not vegan.

Yes! The Original Pringles Flavour is vegan. Here’s a list of the ingredients:

Unfortunately, they’re not vegan because they contain dairy. However, you can still have them if you’re a vegetarian.

Yes, Paprika Pringles are considered vegan-safe because they don’t contain any dairy products.

Pizza Pringles contain whey, cheese, and milk, so you can sort to another option if you like this flavour.

Surprisingly, Pringles Smokey “Bacon” flavour is considered vegan. The smokey taste comes from burning sawdust and chips and condensing the resulting particles into a liquid that’s added to the chips.

As for the bacon, Pringles has a special mix that includes torula yeast, onion and garlic powders, coffee, sugar, and other species and natural flavourings that give a bacon-like taste.

It’s crystal clear that we can’t just say that Pringles are or are not vegan! We had to break things down and check each flavour on its own. As we were saying at the beginning of the article, it’d be better to know which ingredients are vegan-safe and which are not.

This way, even if new flavours come out, you’ll always know if they’re vegan or not without even looking it up.