Produced by Kraft Foods, Miracle Whip became popular during the great depression when mayonnaise became quite unaffordable. Miracle Whip was launched as an almost similar and more affordable alternative to mayonnaise. People all over America immediately welcomed the new wonder ingredient to their burger and sandwich recipes and many still do.

When you first step into veganism, you encounter quite a number of commonplace food items that have no reason to be non-vegan. But sadly, most foods always contain some or the other animal based product. You have definitely tasted Miracle Whip at least once in your life, but is MiRacle Whip vegan?

Why is egg a component of Miracle Whip?

True. Why does the egg have to be a component of all the foods we want to eat? This is mainly because the manufacturers don’t realize there are other less cruel ways to achieve the same results with their foods.

The lecithin functions effectively in naturally emulsifying and mixing all the ingredients into a smooth mixture. This is possible because of the distinct chemical structure of lecithin that attracts water on one side and fat on another.

If not for lecithin, such a large number of ingredients that go into this mixture would be very difficult to blend in. Due to the presence of lecithin, eggs come handy in producing homogeneous mixtures and condiments that are stabilized and regulated in consistency.

Most salad dressings, including mayonnaise, contain egg because of this unique property. You should always check the ingredient list of emulsions and dressings that commonly use egg as a constituent.

The unique binding property of eggs is also used in ice creams and cakes.

There is a debate around the consumption of eggs by vegans

Some vegans do not understand the exact definition of veganism. It is a lifestyle that aims at reducing and alleviating animal suffering. Meat, eggs, and dairy are the chief products that vegans don’t consume.

A lot of people assume that veganism refers to following a healthy diet, or that it is okay to consume eggs if you treat chickens nicely otherwise. This is absolutely untrue. There can be no excuse for eating eggs if you practice veganism.

This is not just the practice of a healthy lifestyle. Veganism is a deeply rooted political movement that destabilizes corporations that feed on animal cruelty. Consumption of eggs along with a plant-based diet is called an ovo vegetarian diet, not a vegan diet. There is a similar debate around the consumption of milk.

In short, Miracle Whip is not fit to be consumed by vegans because it contains eggs. Vegans do not eat eggs, period.

There are three main varieties of Miracle Whip. Let’s have a look at their ingredients to decide better.

We have already mentioned the presence of eggs in this popular salad dressing. Another problematic and potential non-vegan ingredient is natural flavors.

According to me, this shouldn’t bother you. Because when you are a vegan, you are already ahead of the vast herd of humanity blind to the suffering of animals. You might never know how the natural flavors in your food have been obtained. This doesn’t mean you omit eating those foods simply because natural flavors have been mentioned on the ingredients.

If it bothers you, it is advisable to question the manufacturers regarding the same and get your right satisfying answer.

Although, avoiding small substances like natural flavors is not as impactful to veganism as actually avoiding the products of prominent cruel industries like poultry and dairy.

There is another assumption around this variety of Miracle Whip. Many vegans believed that this variety contained gelatin. While there is no reason for this variety to contain gelatin, it does contain cellulose and xanthan gum for its thick consistency and texture. Xanthan gum and cellulose are plant-based materials unrelated to gelatin.

While the presence of eggs is enough to disqualify this product for vegans, we would like to bring your attention to another debatable ingredient in veganism, sugar.

Sugar is considered problematic by many vegans because most sugar in North America is filtered using bone char.

Now that you know that all varieties of Miracle Whip are non-vegan, what options do you have? Trust me, you still have so many options to dress your salads and sandwiches appropriately.

There is still nothing to worry about, Vegan Miracle Whip is easily available in the market and it doesn’t contain eggs. Xanthan and guar gums replace the egg in this variety.

Vegan mayonnaise is also easily available in all major supermarkets. 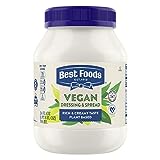 These are some popular brands that offer vegan mayonnaise.

If you still don’t trust foods that claim to be vegan or if you aren’t satisfied with the less satisfactory products produced under the vegan manner, it is advisable to make your own vegan Miracle Whip at home. Why? Because it is very easy!

Make you own Vegan Miracle Whip

There are a number of popular recipes to make your own vegan Miracle Whip at home. We have brought you the most relevant and easy ones.

The one that is the simplest

You require little patience and a blender for this recipe. The other ingredients are:

The first step will amaze you because it is almost the last step. Put all the ingredients together into a food processor and run it for a minute. When this is done, scrape the mixture from it’s walls and stir for two to three minutes.

Add extra salt and pepper according to your taste. Your home-made vegan Miracle Whip is ready!

The one that tastes more exquisite

You can make an exquisite Miracle Whip at home while using much simpler ingredients. This reci[e requires some short and some ling steps so add extra patience to the list of ingredients. The other constituents of this recipe are:

The first step is the same as the first recipe, but it is not the last step. First, put all the ingredients together in a blender. Keep blending until a smooth mixture is attained.

Now comes the step that requires patience. Store this mixture in the refrigerator for two weeks. You will not believe the quality of the Miracle Whip you’ll have made.

The consistency will be thick like store bought Miracle Whip and it will be easy to use as a condiment or spread.

To conclude, Miracle Whip is not vegan

Miracle Whip is not vegan and there is no room for doubts. Egg is a non-vegan ingredient that can never be acceptable in a vegan diet.

There are many comparable varieties of Mayonnaise and Miracle Whip that are vegan. Vegans should rely on them or make their own vegan Miracle Whip at home.

Never believe someone who says they are vegan but they consume products with eggs!