Dark chocolate is one of the most popular desserts for both vegans and non-vegans alike, but there’s a distinction that needs to be made between the types of dark chocolates to ensure that they’re safe to consume for vegans.

In this article, we’ll go in-depth on what qualifies dark chocolate as vegan, how to choose vegan dark chocolate, its benefits, and show you some of the best dark chocolate brands for vegans. So, let’s get started!

What Is Dark Chocolate?

The main ingredients of any chocolate are typically cacao beans, sugar, and milk. Dark chocolate takes milk out of the equation and instead adds a larger quantity of cacao, an emulsifier for preserving texture, and usually has less sugar than other types of chocolate. All of these measurements give dark chocolate the bitter taste that we all love and appreciate.

The process of making chocolate is initially the same for all types. First, cacao trees are grown in a forest, where cacao is harvested manually. When the seed pods that contain cacao beans are ripe, they’re collected and have the cacao beans removed from inside them.

In fact, fresh cacao beans have more of a purple-ish colour, so they’re sent for fermentation processing, where they’re heated using either heated trays or the sun’s natural heat, which gives them an even brown colour.

Before these beans are shipped off to manufacturers, they need to be dried to eliminate extra moisture and reduce their bitterness and acidity. The drying process also contributes to the further development of the typical brown chocolate colour.

Once cacao seeds go through this process, they’re shipped off to factories to be roasted into cacao nibs, then melted into chocolate liquor. Up until this point, there’s nothing non-vegan about chocolate. It’s only when manufacturers begin to add their own ingredients that chocolate gets separated into these two categories.

How to Choose Vegan Dark Chocolate

It’s not hard to find vegan dark chocolate, as dark chocolate already doesn’t rely on dairy products for its taste. Usually, you’ll find that vegan chocolate is labelled as such.

Otherwise, a good rule of thumb is to pick out chocolate that contains 50% cocoa or more. The higher percentage of cocoa gives less room for non-vegan additives. Still, you’ll need to check the ingredients list. Ingredients such as chocolate liquor, vanilla, and cocoa butter (which is actually vegan and not the same as regular butter) are safe.

Be wary of milk-derived ingredients such as casein, milk fat, milk solids, and whey. Unless it’s specified that this chocolate is vegan, avoid chocolate filled with peanut butter, caramel, or toffee, as they usually contain dairy.

Generally, if a label contains a long list of ingredients, chances are they have fillers derived from dairy, so avoid those too.

Dark chocolate is one of the most loved, guilt-free desserts for anyone who’s watching their sugar intake, but they’re just as beneficial for everyone.

The cacao plant which chocolate comes from is packed with high levels of antioxidants. These antioxidants work on reducing oxidative stress.

Oxidative stress, which contributes to the natural ageing process, could, over time, increase the risk of developing several diseases such as diabetes, cancer, and Alzheimer’s.

When harmful substances, such as germs, attack the body, our immunity system responds through inflammation to try to remove this substance. If the substance attacking our body is a foreign body, such as an irritant, bacteria, or virus, this response helps preserve our health and prevent infections.

Unfortunately, our own cells or tissues are sometimes confused for foreign bodies by our immunity system, so it starts to attack them, leading to autoimmune diseases. Inflammation poses the risk of type 1 diabetes and could contribute to type 2 diabetes, obesity, and heart disease.

Fortunately, dark chocolate was found to include compounds with anti-inflammatory properties that reduce inflammation in the body.

Flavonoids, which are naturally occurring compounds in plants, contain a sub-group among them known as flavanols. The cocoa’s flavanols were studied for many years and were found to improve blood flow to the brain by helping blood vessel dilation. They were also found to fight cell damage and prevent blood clots.

These benefits majorly contribute to lowering blood pressure, which is a major risk factor for heart disease.

Another heart disease risk factor is high cholesterol, which dark chocolate helps regulate. It contains compounds such as theobromine and polyphenols, which may lower LDL levels (low-density lipoprotein) cholesterol.

Despite the numerous health benefits of dark chocolate, too much of it could still pose some risks. The lack of milk and milk-derived flavouring in vegan dark chocolate, in turn, makes manufacturers add lots of sugar and saturated fats, which are found in cocoa butter.

Since sugar and fats content differ from one brand to another, it’s advised to check the nutrition label and to pick dark chocolate that contains a higher percentage of cacao solids, typically 70% or more, as these usually have less sugar. It’s also advised to limit your intake to about 30-60g of dark chocolate per day.

Dark chocolate is one of the most preferred chocolates for cooking, thanks to its texture and consistency. You can use it to make glazing for a cake or make ganache, pudding, or mousse. The recipes that you can add dark chocolate to are endless.

Of course, there’s always the option to eat it right out of the package, too.

The search for vegan dark chocolate is relatively easy, but it can get more challenging when brands don’t label their chocolate. Below, I’ve gathered some of the most famous dark chocolates available and carefully examined their ingredients list to finally reach a verdict on whether or not they’re vegan.

Lindt dark chocolate offers a variety of flavours and percentages of cocoa, and you’ll be pleased to know, they’re actually vegan!

They aren’t made with any non-vegan products, but there may be a slight issue. You see, they’re manufactured in the same factories where some of their other flavoured chocolate is made, which contains non-vegan products. So, despite having entirely vegan ingredients, they still have a disclaimer that states that they may contain milk.

That means that they could contain traces of milk, which some vegans have no issue with, but others could ultimately be against that. So it all comes down to your own preferences.

This one is debatable. Cadbury Bournville’s ingredients, which are sugar, cocoa butter, cocoa mass, emulsifier, and vegetable fats, are all, in fact, vegan. They’re not derived from animal products in any way, shape, or form.

Still, these vegetable fats include palm oil, which some vegans prefer not to consume at all due to the way it’s produced. It often requires deforestation, which destroys the habitats of animals.

Bournville chocolate is also produced on the same line as milk chocolate, so it could contain some milk traces.

Still, that doesn’t take away from the fact that Dove dark chocolate contains milk, so vegans shouldn’t consume it.

Although Ghirardelli dark chocolate has a wide range of flavours and cocoa percentages, such as their moonlight mystique 92% cocoa chocolate, they’re unfortunately not vegan.

Among all of their different flavours, they have one ingredient in common, and that’s milk. So, they’re definitely off-limits for vegans.

E322, which is the symbol for lecithin, is a group of fatty substances that could be derived from either animals or plants. E476 is made from castor oil and fatty acids. While both ingredients have the possibility of being vegan, it’s not mentioned on the label. So, they could also be derived from animal sources.

Still, the Amul 55% cocoa dark chocolate has a vegan logo placed on it, so this type definitely uses plant-derived emulsifiers.

Dairy-free, gluten-free, refined white sugar, and trans-fats-free, Divine Treasures offer a beautiful, rich taste. That comes as no surprise, as their chocolate is sourced from organic, socially responsible cacao, then crafted with various recipes.

Besides their dark chocolate, their products range from home-made soft serve ice cream to rich, classic brownies, all of which are entirely vegan. Go ahead and try them and treat yourself to a sweet taste of chocolate paradise. 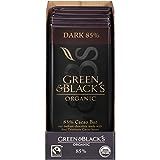 Green & Black’s vegan dark chocolate crosses out all the requirements to be qualified as such. It’s organic, doesn’t contain any artificial flavours, colours, or additives, and is made from ethically sourced cocoa.

It has a rich, smooth taste with flavours such as roasted almonds, raspberry & hazelnut, sea salt, and salted caramel.

Endangered Species use plant-based milk, such as oat milk, as a vegan milk substitution. They also use responsibly sourced ingredients and zero artificial additives or sweeteners.

Among some of their most loved dark chocolate flavours, which contain 75% cocoa, mixed berries, coconut and almonds, and sea salt, have oat milk.

Not only do they make delicious, cruelty-free chocolate, but they’re also making an impact by donating 10% of their annual net profits to organizations that support their mission to make an impact for wildlife and habitats.

So you’ll get to make a difference while also enjoying dessert!

Read more reviews and get the latest price

Dark chocolate is just as delicious as it’s beneficial, but some extra research work needs to be done to ensure that it’s 100% cruelty-free.

Still, this extra research time will be worth it when you finally get to enjoy a tasty chocolate bar that didn’t require any animals to be harmed.