Are Bagels Vegan? Find Out Now!

Wheat Thins are a healthy and delicious snack you can never get enough of. Whether you are munching them along with your favorite TV show or making mini sandwiches like wannabe chefs, Wheat Thins seldom disappoint anybody.

This is one snack mothers don’t ask their children to eat less of. I wonder if it is the same with vegan mothers. It is not uncommon to come across new information which states that the product you’ve always been consuming is non-vegan. Are Wheat Thins vegan?

Don’t worry, most varieties of Wheat Thins are vegan. But some are not. We will make sure you know all about the vegan and non-vegan ingredients of your favorite snack so that your next break is guilt-free.

All Wheat Thins are not vegan

A vegan lifestyle is aimed at reducing animal-cruelty and alleviating animal suffering. Vegans avoid all foods and substances that utilize animal products. It is important that you avoid the Wheat Thins that contain non-vegan ingredients.

While all Wheat Thins are healthier than most other snacks out there, a few of them may be high in fats instead. Have a look at them all.

The Original Wheat Thins are vegan

All ingredients in the Original Wheat Thins are vegan. The fundamental ingredients of this variety include unbleached enriched flour, soybean oil, malt syrup, and cornstarch.

The use of natural vegetable colorants makes this product all the more special. The natural colors are derived from turmeric and also extracted from annatto. 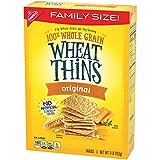 This low sodium salted version of Wheat Thins is as vegan as the original version and as delicious as the best salted snacks. The major ingredients are similar to the Original Wheat Thins include whole grain wheat flour, cornstarch, and malt syrup.

You’d not like this product if you have an issue with consuming BHT. the manufacturers add BHT to this product to preserve its freshness.

Strict vegans may have problems with sugar present in this product. The coloring agents used are plant-based and obtained from annatto and turmeric. 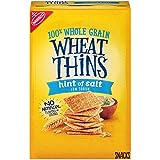 The Reduced Fat version of Wheat Thins is also vegan

Good for you, the Reduced Fat version of Wheat Thins is also vegan. The main ingredients are whole grain wheat flour, malt syrup, soybean oil, and the plant-based natural colors.

Sugar is the sole controversial ingredient in this variety too. 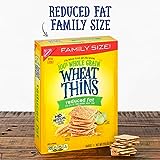 The multigrain Wheat Thins may just be the healthiest variety of Wheat Thins around. The only controversial ingredients are BHT and sugar. 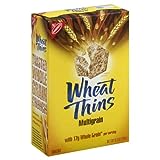 Contrary to your expectations, the Sun-Dried Tomato and Basil Wheat Thins are vegan

There are four types of plant-based natural colors in this product. These are obtained from paprika, annatto extract, and turmeric oleoresin. Apart from these, caramel color is also utilized in this product. Sodium Metabisulphite is used to retain the colors. 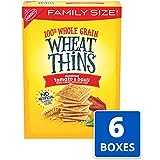 Wheat Thins Spicy Buffalo is anything but non-vegan

You probably didn’t expect this. The Spicy Buffalo variety of Wheat Thins is vegan, as vegan as such delicious food can be.

The fundamental ingredients of this variety are the same as the original variety. Apart from them, it contains refiner’s syrup salt, cayenne pepper sauce, tomato powder, garlic powder, and citric acid.

Here is the part that makes vegans happy. The plant-based natural coloring agents in this variety are obtained from paprika, turmeric oleoresin, and annatto extract.

Like all varieties of Wheat Thins, this one also contains sugar.

The Zesty Salsa variety of Wheat Thins is vegan

Unlike the Zesty Salsa flavors of most popular snacks, this variety of Wheat Thins is undoubtedly vegan.

The Cracked Pepper and Olive Oil Wheat Thins is vegan

The fundamental ingredients of Wheat Thins are all vegan, the other vegan ingredients of Cracked Pepper and Olive Oil Wheat Thins include dried green bell peppers, parsley, onion powder, garlic powder, and citric acid. All food colorants are natural and plant-based.

Strict vegans have issues with the sugar and natural flavors present in this product. 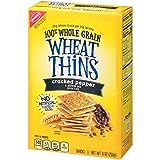 The Ranch flavor of Wheat Thins is not vegan

Contrary to our expectations, there are some non-vegan varieties of Wheat Thins. The first one amongst them is the Ranch variety. The fundamental ingredients are the same as all other Wheat Thins varieties. But there are some obvious non-vegan ingredients in this product. These include buttermilk, cheddar cheese powder, sodium caseinate, and whey.

As you must already be aware, buttermilk is a product obtained from dairy milk. Vegans do not consume dairy milk, meat, and eggs. The milk produced by cows is meant for their calves and not for human beings. This stealing of milk from cows is the epitome of the dairy industry and vegans are against this animal exploitation.

Cheddar cheese is made from cultured dairy milk, salt, and enzymes. Sodium caseinate is a protein derived from dairy milk and so is whey. All  these ingredients are unacceptable in a vegan diet.

This variety also contains monosodium glutamate  and disodium guanylate to enhance flavors. There are natural and artificial flavors, sugar, and soy lecithin in this product.

Honey Mustard is another non-vegan flavor of Wheat Thins

Honey Mustard variety of Wheat Thins contains honey solids apart from sugar and natural flavors which are problematic to many vegans.

Honey is a controversial subject amongst vegans. Many vegans don’t consume honey because it is obtained from the exploitation of honey bees. A number of bees die and others have to toil twice as hard to reproduce the honey stolen by humans.

The Chilli Cheese variety of Wheat Thins is non-vegan

The basic ingredients of this variety are the same as other varieties. But the additional ingredients wreak havoc. This flavor is absolutely not vegan.

As expected, the Smoky BBQ flavor of Wheat Thins is not vegan

Just like the Smoky BBQ flavors of all other popular snacks, Wheat Thins Smoky BBQ flavor is not vegan. Contrary to your expectations, the smoke flavor is usually vegan because it is commonly obtained from burning wood. The non-vegan ingredient in this variety is again honey.

If you have no problem with the consumption of honey, the Smoky BBQ flavor is vegan for you. Otherwise, it is clearly non-vegan. 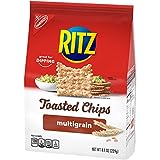 The Wheat Thins Veggie Toasted Chips are not vegan

The reality of this variety of Wheat Thins has come as a surprise. Wheat Thins Toasted Chips are not vegan. Although the basic ingredients sound wholesome and vegan, there are non-vegan additional constituents like natural flavors and artificial colors.

Unlike all the other varieties of Wheat Thins, the Toasted Chips contain artificial coloring agents like Red 40, Yellow 6 Lake, Yellow 5 Lake, Blue 2 Lake. all these colors are notorious for being tested on lab animals.

So is Wheat Thins Vegan?

Apart from the Ranch, Honey Mustard, Chili Cheese, Smoky BBQ, and Veggie Toasted Chips, all other varieties of Wheat Thins are vegan and as healthy as snacks can be.