Check out:
0 Shares
READ NEXT

The sweet and colorful Smarties are a must-have in every US home. Not only are they delightful in appearance, but they are also irresistible in taste. This is the popular candy children look out for on Halloween.

Stepping into veganism, you must have realized the dark realities of many old and joyous foods. Smarties taste of sugar, chocolate, and nostalgia, but are Smarties vegan?

You must have noticed that two varieties of Smarties are sold in the USA. one is produced by Nestle and the other is the more popular one. You may be able to differentiate the two types by the number of candies inside each of them. Nestle has more candies in one pack than the other Smarties.

However, the ingredients of both types of Smarties are similar. Unfortunately, both of them are not vegan. The Smarties produced by the Smarties Candy Company are vegan while those produced by Nestle are not.

It is commonplace for vegans to be disappointed this way. But the disappointment is always real. It is sad that many manufacturers still choose to utilize non-vegan ingredients when there are easy vegan replacements for those materials.

Have a look at the constituents of Smarties by Nestle

Smarties are no less than colorful gemstones for children. Well, precious stones that are filled with delicious edible chocolate. You might have to cut off your favorite treat forever after going through these constituents. Of course, until the manufacturers realize that vegan alternatives exist and they can do better.

The round and colorful Smarties are not vegan

The key ingredients of this much loved candy will ruin it for you forever. The incomparable chocolate inside Smarties is milk chocolate. Milk derived from dairy, along with whey powder, lactose, and cocoa is used to make this chocolate.

You must be aware how unacceptable dairy milk is in veganism. Cows only produce milk after giving birth to calves. That milk is meant to be consumed only by the calves. Humans steal the milk of cows to fulfil their own need and greed which is a form of animal exploitation.

The cows in the dairy industry are often given hormonal substitutes so that they keep producing milk for humans at the cost of their own health. There is no way dairy milk can be consumed in veganism.

Vegans derive milk-based nourishment from plant-based milk alternatives that taste better and are more nutritious. The source of such milk is often soy and almond.

Apart from milk, Smarties contain sugar which is problematic to some vegans. They also contain natural flavors and artificial colors.

There is a popular doubt amongst vegans that Smarties contain gelatin as an ingredient. Vegans constantly worry about the presence of gelatin which is commonly used to render candies a soft and chewy texture. While this may be the case with many popular candies, Smarties do not contain gelatin.

Although, vegans can still not consume Smarties until the manufacturers replace the problematic ingredients with vegan alternatives. Trust me, thi is a big thing to expect out of Nestle.

Nestle is notorious for making huge profits solely out of animal-based products. If you buy anything from Nestle, it benefits the exploiter of a large number of innocent animals.

However, every bad thing can change for good. Popular demand can urge even predominantly non-vegan companies to shift to more vegan production.

Unlike the original Smarties, Smarties Candy Rolls are vegan

Strict vegans consider natural and artificial flavors and artificial coloring agents problematic. However, Nestle has very proudly declared their new dietary and ethical shift with the Smarties Candy Rolls that are vegan.

They have clearly stated that the calcium stearate present in these candies is derived from plants and there are no meat, egg, dairy, or fish based ingredients in these Candy Rolls whatsoever.

Your ethical choices are no more in a battle with your sweet tooth. With the advent of Smarties Candy Rolls, big manufacturers have stepped into veganism and their act should be encouraged. More popular demand for other vegan foods will urge the manufacturers to shift in the right direction.

Some people are of the opinion that Nestle does not produce a few of the ingredients themselves so they may not be vegan. According to me, one should understand that veganism is a political movement that needs more support and participants. A 100% vegan diet is in no way better than a 95% vegan diet if all the major impact is caused by the 95%.

This is just the good news that you wanted. Even though the Smarties by Nestle are not vegan, it doesn’t eliminate your chance at having vegan Smarties in the US.

There is no need to let those craving subside, the Smarties Candy Company has effectively replaced all the non-vegan Smarties ingredients with completely vegan and trustworthy constituents.

There is no dairy milk product in these irresistible Smarties. In addition to that, eggs and other animal-based products are also absent. The company website has clearly mentioned that all Smarties candy made by the Smarties Candy Company is vegan. Vegans don’t need to worry about their dietary and ethical choices coming in battle with their sweet tooth.

The makers have assured that their calcium stearate is derived from plants, and no animal-based products are used in the processing at all.

It is very important for whole corporations to step up for the need of the hour. A vegan diet is essential for the environment, for the animals, and even for your own health. For the people that develop this responsibility towards their planet, vegan Smarties are nothing less than a gift.

The peculiar thing is, Smarties produced by the Smarties Candy Company have always been vegan. Since three generations, the company hasn’t used any animal-based ingredients in making their delicious candy. The company executive herself is vegan.

Granddaughter of the creator of Smarties, Liz Dee grew up as an omnivore but discovered veganism when customers questioned about the vegan status of Smarties candy. In researching veganism, she found out that their Smarties have always been vegan. She herself went through a change of heart and is now a devoted vegan.

Animal products are unnecessary and cruel, and there should be no reason for animals to suffer this much.

It should however be noted that there are a few products produced by Smarties that aren’t directly manufactured by the company. It is important to thoroughly check the ingredient list in this case.

Just like Smarties by the Smarties Candy Company, there are a number of candies that have always been vegan

Whether you are pumping up for halloween or just collecting your set of treats, it is good to know that some candies can be relied upon. They have always been vegan and continue being so.

Don’t ever have second thoughts while picking up Airheads from the supermarket aisle. These taffy-like tangy strips of deliciousness deserve all your love, attention, and hunger. Choose from the vast variety of flavors and take home strawberry, watermelon, green strawberry, or raspberry Airheads that are all delectable in taste. This candy is mainly sold as bars and candies, all vegan.

The giant pink pieces of Hubba Bubba bubble gum are vegan. It is not common for chewing gums to be vegan in the first place. Most chewing gum manufacturers indefinitely hide their ingredients and it has been speculated that they contain gelatin, or even animal meat.

Hubba Bubba is just perfect for blowing the biggest bubbles and for relishing cruelty-free amazing taste. The company produces different varieties of the vegan chewing gum: bubble-tape, filled centers, powder-filled Hubba Bubba are the most popular. The makers have even rolled out a sugar-free version so there is nothing at all to worry about. 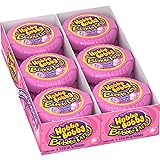 The delectable vegan gummies produced by Surf Sweet Candy are loved equally by both adults and children. The most popular gummies by this company include Peach Rings, Gummy Worms, and Sour Bears. Apart from being vegan. This candy is also gluten-free and soy-free. 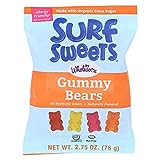 To conclude, Are Smarties Vegan? all Smarties are not vegan

Popular demand will urge more manufacturers to shift into the vegan bandwagon, and rightly so. Apart from Smarties and the few other candies mentioned above, a lot many candies have been perfectly vegan since their time of advent. These include your popular Jolly Ranchers, Twizzlers, Swedish Fish, and even Skittles.

The best candies are probably all vegan. Your sweet tooth can relax.

Is Pesto Vegan? Find Out Now!