The 9 Best Vegan Restaurants in Montreal

When people start to follow a vegan lifestyle, one of the first things they want to find out is which of the foods they used to enjoy they can still have. Sometimes people are surprised to hear that certain very common foods are actually vegan, despite not being specially promoted to vegans.

One example of this is Oreos, the famous snack brand. Many vegan websites and organizations, including PETA, have promoted the idea that the popular cookies are suitable for vegans. But is this actually true? And if it is, then how are Oreos vegan? In this article, we take a deep dive into the ingredients of the various varieties of Oreos to answer the question: are Oreos vegan?

First created in New York City in 1912, Oreo biscuits are enormously popular worldwide. They are sold in more than 100 countries, and it has been estimated that over 450 billion have been produced. Manufacturers Kraft Foods have described them as “the world’s best-selling cookie.”

However, at first glance, they appear very unlikely to be a vegan snack. Isn’t that cream sandwiched in between those two pieces of chocolate biscuit?

Certainly, the original Oreos’ recipe was not vegan. But in the late 1990s, the company decided to substitute the lard in the crème filling for partially hydrogenated vegetable oil. Lard is, of course, derived from pig fat. The vegetable oil that replaced it may not be healthy, but it is vegan.

But does that change alone mean that Oreos are suitable for vegans? Interestingly, despite what many vegan websites say on the subject, the Oreo website says no. On their FAQs page, they say “OREO have milk as cross-contact and therefore they are not suitable for vegans.”

However, all that means is that the cookies are produced in a factory that also handles milk products, meaning that there is a risk of cross-contamination. That makes them unsuitable for very strict vegans or people with milk allergies. However, some vegans are still prepared to accept products that may have some cross-contamination as long as there are no animal products in the list of ingredients, as is the case with Oreos. 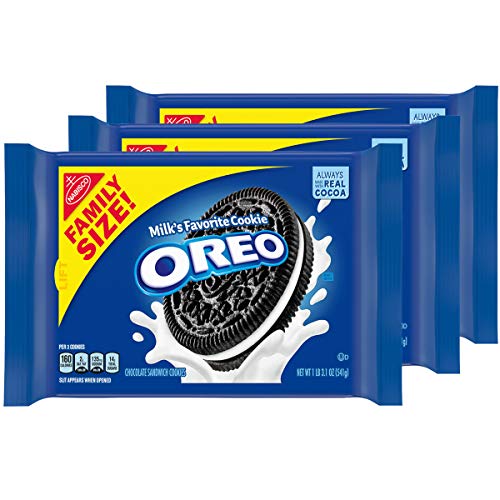 What else should vegans look out for in the Oreos ingredients list?

But are there any other things that vegans should look out for in the ingredients list? The answer is yes. One problem concerns the very oil that replaced the lard in the recipe. The ingredients list shows that this oil is either canola oil or palm oil. But what’s the problem with that?

Palm oil is technically vegan in the sense that it comes from a plant. However, many ethical vegans have concerns about the links between palm oil plantations and the destruction of the tropical rainforest habitat of numerous endangered species (most famously the orangutans of Borneo and Sumatra). If you are trying to avoid palm oil for that reason, then Oreos are not for you.

The other big vegan issue with Oreos, and most similar snack foods, concerns the sugar that they use. Regular readers of this blog will know that sugar is a concern for vegans because of the way it is processed. This is because some cane sugar is passed through a filter made from “bone char” (which means the charred bones of animals, normally pigs or cows).

It’s very difficult to find out which cane sugars have been through this process, and which haven’t. The easiest way to guarantee that what you are purchasing hasn’t been through bone char processing is to look for either beet sugar or organic cane sugar. As Oreos don’t use those safe ingredients, there is a risk that their sugar goes through bone char filtration. So, if that is a concern for you as a vegan, then Oreos are best avoided.

What about other flavors of Oreos?

As you would expect from such a big cookie company, there are lots of varieties of Oreo on the market. The vast majority of Oreo varieties are similar to the classic Oreo cookies in terms of vegan suitability. In other words, they don’t contain directly animal-derived ingredients, but they do use palm oil and sugar (and they have the same risk of cross-contamination with milk). That means that some vegans will find them suitable, and others won’t. The varieties of Oreos that this applies to include:

The other Oreo flavors and products that are definitely non-vegan (because they contain milk) include:

As always, it is important to check the labels on any Oreo flavor you are interested in, especially because they do use slightly different ingredients in the different countries in which Oreos are manufactured and sold.

Summary and Vegan Alternatives To Oreos

So, what does it all mean? The debate around whether Oreos are vegan is not as black and white as the famous cookies themselves. Lots of vegan websites say they are accidentally vegan. Oreos themselves say they are not because of the risk of cross-contamination with milk products in their factories. However, that it is a risk that many vegans find acceptable, as long as the product does not deliberately contain any animal-derived ingredients.

Other vegans will still have objections to Oreos because of the palm oil they use (a technically vegan ingredient, but one heavily associated with rainforest habitat destruction) or the sugar that could be processed through bone char filtration.

Ultimately, as with so many things about veganism, the decision about whether to eat Oreos or not is a personal one. A case can be made for them being vegan or non-vegan, depending on how strictly or otherwise you interpret your veganism.

It’s also important to remember that, in addition to the Oreo flavors that could be considered accidentally vegan, there are also lots of flavors that are definitely not vegan because they contain milk (see the list above for some examples).

The other option if you are craving that Oreo taste is to check out some of the definitely vegan alternatives on the market. For example, you could try the vegan options from Cookie & Biscuit, or Udi’s Gluten-Free Chocolate Sandwich Cookies, or the cookies and cream offerings from plant-based bakers Gato.

I hope you found this article helpful in your search for vegan snacking options. If you’d like to join the debate or tell us that we missed out your favorite brand of vegan Oreo-style cookies, please let us know in the comments below.