Are Nutter Butters Vegan when All Other Popular Biscuits Aren’t?

Graham crackers are named after Sylvester Graham, a 19th-century American preacher who founded one of the United States’ first vegetarian movements. But are the much-loved snacks suitable for modern-day vegans? In this article we take a deep dive into the ingredients lists of the most popular brands to answer the question: are graham crackers vegan? But first, let’s take a quick look at the fascinating origins of the sweet snack.

The origins of Graham crackers

In the early-19th century, a cholera epidemic was sweeping across Europe, and Americans were concerned about the prospect of it spreading over the Atlantic. Standard medical thinking of the time believed the best way to prevent cholera was to drink ample quantities of port and eat as much meat as possible. However, some observers had radically different ideas.

One such man was Sylvester Graham, a preacher and early health food guru, who warned about the dangers of alcohol. He also argued that people should only eat plants, following the diet of Adam and Eve in the Bible, and was an early exponent of the benefits of whole grains.

When the cholera epidemic finally struck America, Graham’s followers seemed to be successful in resisting the disease. So, his fame and ideas spread, leading to the rapid growth of “Grahamism”, one of America’s first vegetarian movements.

Although Graham himself did not market any food products, some of the “Grahamites” who followed his ideas started to cash in with the creation of graham flour, graham bread, and graham crackers. All of which are still available today under a wide variety of brand names.

Graham crackers’ vegetarian credentials are impeccable: but does that mean they are suitable for vegans? In many cases, the answer is yes. Standard ingredients for graham crackers include graham flour (of course), other enriched flours, salt, oil, and molasse, with many brands also using cinnamon for flavor.

In line with Graham’s own plant-based beliefs, the use of dairy products or eggs in graham crackers is very rare. However, one thing to watch out for is the use of honey, which some brands add for extra sweetness. Although opinion is divided among vegans regarding honey, most will not take it on the simple grounds that it is an animal product. A recent study concluded that around 50% of the graham cracker brands on the market in America use honey.

Another thing to look out for is sugar. As discussed in previous posts on this site, sugar can be a concern for some vegans because of the way it is processed. The issue is that some cane sugar is passed through a filter made from “bone char” (i.e. the charred bones of animals, normally cows or pigs).

It’s very difficult to find out which cane sugars have been through this process, and which haven’t. So, if you are concerned about this issue, the easiest way to guarantee that what you are purchasing hasn’t been through bone char processing is to look for either beet sugar or organic cane sugar.

Another ingredient that concerns some vegans is palm oil. Again, like sugar, this is technically vegan in the sense that it comes from a plant. However, many ethical vegans have concerns about the links between palm oil plantations and the destruction of the tropical rainforest habitat of numerous endangered species (most prominently the orangutans of Borneo and Sumatra).

If palm oil is something you’re concerned about, then it’s another thing to look out for on the ingredients lists of your favorite brands of graham crackers.

Finally, some graham crackers also contain lecithin, which is a generic label to describe fatty compounds used as emulsifiers (products that promote the mixing of oil and water).Some types of lecithin come from plant sources, such as soybean, while others come from animals. Some labels may state “soy lecithin”, but other labels will not specify.

All the lecithin-containing graham cracker brands that we review below indicate that they use soy lecithin. However, if you find another brand that does not specify the source of its lecithin, the only way to find out is to contact the manufacturer.

Now, let’s take a look at some of the most popular graham crackers to see if they are vegan or not. 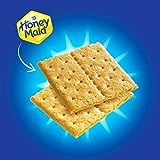 Honey Maid is the number one brand of graham crackers in terms of sales. However, unfortunately, they are not suitable for vegans. This is because all of their flavors (original, cinnamon, chocolate, and low fat) contain honey.

The full ingredients list for Honey Maid is below:

Some of the other common graham cracker brands that use honey include Annie’s Homegrown, Trader Joe’s, 365 Everyday Value, Market Pantry, and Solimo. 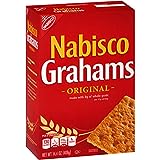 Nabisco produces possibly the most popular vegan graham cracker in America. However, although their Original Graham Crackers contain no animal products, they do use palm oil (see above), which is avoided by some ethical vegans.

Nabisco also produces bear-shaped “Teddy Grahams” in four different flavors: honey, cinnamon, chocolate, and chocolate chip. All Teddy Grahams are dairy-free, and all bar the honey version are vegan. The Teddy Grahams have the bonus of using canola or soybean (rather than palm) oil.

They do also include lecithin, which can be non-vegan in some cases, but as they specify that it is soy lecithin that is fine for followers of plant-based diets.

Ingredients for the chocolate flavor Teddy Graham are given below:

Keebler is another widely available, vegan-friendly graham cracker. They also have the advantage of not including palm oil in their ingredients (they use canola oil instead), and the lecithin they contain is soy.

Based in Edinburgh, Scotland, Nairn’s is the leading producer of oat-based products in Britain. They make four flavors of “Oat Grahams”, three of which (original, raisin, and stem ginger) are suitable for vegans. The chocolate chip flavor is marked “suitable for vegetarians” because it may contain of milk (although, like the other flavors, it has no animal products in its main ingredients list).

As with Nabisco’s Graham Crackers, Nairn’s do use palm oil. They take care to describe it as “sustainable” palm oil, although some critics of the palm oil industry dispute the validity of that term. Again, as with all things palm oil, it is down to the views of the individual vegan as to whether or not they accept products that use it.

The full ingredients list for the original version of Nairn’s Gluten-Free Oat Grahams is reproduced below: 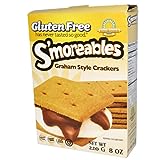 Finally, Kinnikinnick is another producer of a gluten-free graham cookie. They are also vegan, although they do note that there is a chance that traces of egg may have found their way into the product during the production process.

Their lecithin is plant-based (as it comes from sunflower). They are, however, users of palm oil, as shown in their ingredients list below:

So, what does it all mean? Generally, vegan graham crackers are pretty easy to find, with a wide range of big brands offering vegan-friendly versions of the much-loved snack. In terms of non-vegan graham crackers, the issue is generally honey rather than dairy.

However, some of the vegan versions do use palm oil, which is technically vegan but still avoided by some people on ethical grounds on account of its links to habitat destruction. Also, further research is required to ascertain exactly the types of sugar used in the various brands of graham crackers to make sure that no animal products are used in the process.

Overall, as long as you choose with a little care, graham crackers are an excellent option for a vegan snack. No doubt Sylvester Graham himself would have been delighted to see his plant-based ideals becoming so popular in the 21st century!